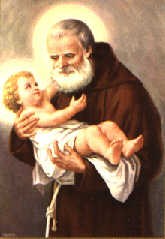 His feast is celebrated on May 18. Felix was born at Cantalice, Italy, in 1515. His parents, Santi and Santa Porri, were farmers, struggling to make ends meet. Felix had two older brothers, Blase and Charles, and two younger brothers, Potenza and Peter Marino. The latter perished in one of the many battles between Cantalice and Rieti. When he was about 10 years old, Felix was hired out as a farmhand for the Picchi family at Cittaducale. Farmhands were rustic, "untamed" people, raised in the outdoors. Vegetarians, they learned how to survive in the wild. Their job was grueling. After a hard day's work, Felix found relaxation in wrestling. As a youngster, Felix' cousin would read to him the lives of the desert ascetics. Descriptions of their penances had enthused Felix and sparked in him a desire to imitate their austerity. Felix had a dream in which an angel directed him to go to Leonessa to join the Capuchins. In pursuit of his dream, Felix set out for Leonessa where the Capuchin local minister redirected him to the provincial vicar. Not knowing where to find him, Felix returned to work in the fields. He was not accustomed to receiving messages from angels and was even less inclined to waste his time searching for what was elusive. The angel returned a second time, telling Felix to go to the Capuchin Friary at Rieti. Again, nothing came of the trip, so Felix returned to working the land. One day, an Augustinian friar invited Felix to consider joining the Augustinians. Felix replied, "Either a Capuchin or nothing."

He persisted in his desire to become a Capuchin and presented himself at the Capuchin Friary at Cittaducale. The local minister led him into the church, before a large crucifix, asking that he pray to be enlightened. The corpus on the cross was bruised, bloodied, and disfigured. Moved by the sight, Felix experienced the depth of God's love for him. That evening, the local minister (having forgotten about Felix) returned to the chapel to pray. Felix was still there. The local minister remarked, "Son, what are you doing? Still here? You are a good person; we will accept you among us. Jesus will no longer be alone. You will help him carry the cross." Ten days later, toward the end of the autumn of 1543, the 20-year-old Felix was received. He immediately set out for Rome to present himself to the elusive provincial vicar. At the Roman friary of St. Nicholas de Portiis, Felix was received by Bernardine of Asti, who was both the Roman local minister and procurator for the Capuchin Order before the Roman Curia. Bernardine introduced Felix to Raphael of Volterra, the Capuchin Provincial Vicar of the Roman Province, who officially received Felix into the Order.

On a rainy morning in early 1544, Felix set out for the Fiuggi friary where the provincial vicar had determined his year of novitiate would be spent under the guidance of Boniface. During the harsh days of novitiate, Felix suffered debilitating fevers. The friars were considering asking him to return to secular life. As a last resort, they transferred Felix to Monte San Giovanni Campano where Felix recovered. Before the public notary, James of Mastrantonio, Felix relinquished his worldly possessions to his siblings and waived all claim to any future inheritance. He professed vows on May 18, 1545.

Lover of nature that he was, the rustic Felix had become a Capuchin hoping to be able to live the rest of his days in one of the many friaries located in secluded forests. In reality, only the first few years of his religious life were spent in such locations at Fiuggi, Monte San Giovanni, Tivoli, and Viterbo. Then, in 1547, Felix was introduced to the frenzied life of Rome. In his younger years, in imitation of the desert ascetics, Felix had vowed never again to touch bread. Ironically, his Roman assignment was to quest for bread and wine. Despite his desire for seclusion, Felix' ministry placed him in direct, daily contact with a multitude of people. Following then current Capuchin custom, Felix always made his quest barefoot, with eyes cast down. His response to every benefactor was always a humble yet confident "Thank God" ("Deo gratias"). So often was it repeated that Felix became known as "Brother Deo Gratias." Not only did Felix provide the friars with food, but he also furnished food for the hungry. He received permission from the ministers to help the needy, especially widows with many children. It is said that his begging sack was as bottomless as his heart. He never refused a request for help. Felix would dispense oil, bread, wine, and meat. When he could not provide the required aid himself, he would solicit the help of the wealthy, including church dignitaries. Felix always reminded people, benefactors and beneficiaries alike, of divine providence and urged them to give thanks to God. He would visit the sick at the friary, in private homes, at the hospitals of St. James of the Incurables, of the Holy Spirit, and of St. John Lateran. Felix spoke in simple language, exhorting the sick to trust, and to accept sickness as a graced moment.

Felix' reputation as a healer of peoples' ills spread. He would often bless the sick with a crucifix and they would be healed. At other times, he would give away some of the alms he had collected, which, in turn, became channels of healing. Felix healed Constance, the mother of the Cardinal Bishop of Orvieto, Peter Crescenzi, by bathing her eyes with wine he had received as an alms. Similarly, at the hospital of St. John, a patient was healed instantaneously after Felix had given him some donated wine. Friends began to tease Felix saying, "Brother Felix, when I get sick, bring me a little of your wine!" Felix exhorted everyone in his rustic Sabine dialect, always using the informal form of address. He treated every individual with the greatest respect, whether giving alms or receiving them. Felix was a person who had difficulty saying "no," and benefactors knew this. If someone asked for something, Felix always provided.

His upbringing prevented him from putting on airs. A person's social or ecclesiastical position notwithstanding, Felix would directly (and unceremoniously) confront those in need of conversion. Stories of Felix' life read like incidents out of the Fioreffi. One day, Felix, seeking food for the poor, knocked at the door of a lawyer who was immersed in reading a legal treatise. The lawyer, indignant over the intrusion, made it known that he was involved in something far more important than any trivial affair in which the brother was involved. Felix's eyes filled with tears and he asked, "Is there perhaps some law more important than God's?" The lawyer soon abandoned his law career to pursue a life of ministry in the church. On another occasion, Felix confronted the illustrious lawyer, Bernardine Biscia, by placing a crucifix on top of some legal tomes Biscia was perusing. Felix pointed to the Crucified One and said, "Look, Sir Bernardine, all these books were made for you to better understand him."

Felix normally spoke little outside the friary. Even within the friary, what he had to say was more often than not an exhortation for others to give good example. His style was frank and direct. He might tell someone, "I want to correct you." He often reminded Capuchin preachers, "Preach in order to convert people, not to make a name for yourself." At times, he would quote Brother Giles' quip: "Bo, bo, bo, assai dico e poco fo!" ("Tsk, tsk, tsk, a lot of talk, but no action.") To Cardinal Julius Anthony Santori, the Capuchin cardinal protector, Felix once said: "My lord cardinal, you were designated to protect us, not to interfere with matters that pertain to the superiors of the Order." He advised the future Sixtus V, "When you become pope, be pope for the glory of God and the good of the church. Otherwise, it would be better for you to remain a simple friar." The same pope would occasionally encounter Felix questing and would ask for a piece of bread. One day, Felix gave him a piece of stale black bread and remarked to the Franciscan pope, "Excuse me, Holy Father, but you're still a friar."

For his personal devotion and meditation, Felix memorized prayers and liturgical and biblical texts. Despite being illiterate, Felix prayed from the heart and occupied his mind with spiritual reflections. Whether he was walking the streets of Rome, in his cell or in chapel, he was absorbed in contemplation. He would recall the words of the gospel for inspiration. After everyone else had gone to bed, Felix would spend long hours before the Blessed Sacrament entrusting to God's care the people he had met in the course of the day.
He had a curiosity about subjects of which he had no formal education. Often he would seek counsel from the famous Spanish priest, Alphonse Lupo. Felix was a personal friend of Philip Neri and an acquaintance of Charles Borromeo. Felix recognized that authentic holiness was both enlightened and enlightening. Thus, by seeking the advice of knowledgeable people, the "saint of the streets of Rome" was enabled in turn to advise or admonish the people who sought counsel from him.

Felix was an institution for two generations of Roman youth. Youngsters would affectionately call him "Papa," causing some raised eyebrows among those who were unfamiliar with the esteem in which the Capuchin was held. People brought their cares immediately to Felix for help. Even before going to the doctor, they would call on Felix. He would go to their side, kneel, and say an "Our Father" and a "Hail Mary," and then return to the friary confident that providence would take care of the rest. At other times, Felix would exhort the sick to acceptance, saying, "Heaven, heaven," or, "Allow yourself to go to paradise." Felix had an intense fondness for mothers and babies. He would always take a moment to dedicate the infants and to teach the young to repeat, "Jesus, Jesus," or, "Deo gratias." Felix had a talent for spontaneously creating and singing spiritual hymns. People would often ask him to sing. His devotion to the Virgin Mary was not apparent, except in these free verse songs and from the testimony of Alphonse Lupo who knew Felix well. Felix carried out his ministry until just days before his death. Cardinal Santori had offered to use his influence to have the elderly Felix relieved of the difficult task of questing, but Felix refused.

On April 30, 1587, Felix fell ill. He knew he was about to die. To the friars he remarked, "This little ass has dropped; it will not rise again." With Urban of Prato at his bedside, Felix raised his hands and his face became resplendent. Urban asked him what was happening and Felix responded, "I see the Virgin Mary surrounded by a throng of angels." As the local minister was bringing Eucharist as Viaticum, Felix began to sing, "O Sacrum Convivium." He died on May 18, 1587. Felix' remains are enshrined in the Capuchin church of the Immaculate Conception on Rome's exclusive via Veneto.

Sixtus V was determined to proceed to canonization, by Roman acclamation if necessary, but the process was not concluded. After Sixtus V died, the momentum of the process dissipated. Finally, on October 1, 1625, Urban VIII beatified Felix and Clement XI canonized him on May 22, 1712, the first Capuchin to be so honored.