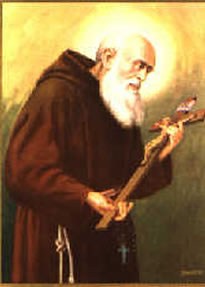 Conrad was not a founder of an order, a priest or a doctor yet his love of God and his devotion to Mary made him a hero of Christ. Conrad excelled in the virtue of Charity, showing itself in love of God and neighbour, devotion to the Holy Eucharist and a childlike confidence in Mary, the Mother of God. Conrad received a good training in Catholicism from his parents whom he helped on the farm. We are told that he spent many hours in prayer while going about his work, so it may not be surprising that this holy youth sought entry to the Capuchins after attending a mission in his town. He entered as a humble lay brother. In his notes we find written, "The Cross is my book." Because Christ had given all to us, Conrad decided to give all he could possibly give for Christ and souls. He held the office of Porter at Altoetting for over forty years. As the monastery was a place of pilgrimage, it was besieged by a thousand calls a day. To young and old alike, to polite and impolite, the saint was kind and gentle.

By living in union with God, he was able to let Christ act through him. In answering questions and discussing God, he led many souls to the Divine Redeemer. Conrad ate little, slept less, and worked hard, but always in communion with Christ, the God of his heart. He had a great longing for the Eucharist and served Mass with great devotion. The Mass was the greatest joy of Conrad's long and hard life. Whatever extra time he had from his work, the Saint spent before the Blessed Sacrament.